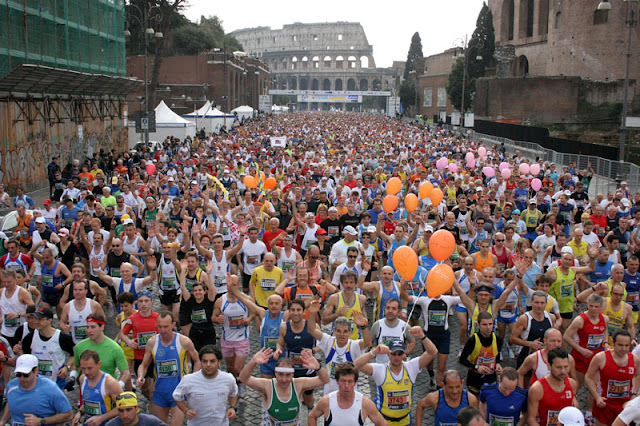 And so we come to the end!.. The race is run, and for better or worse we are gathered at home once again... and even if our bags have still not been unpacked, our photos are still being assembled and I am again trying to come to terms with what Costa calls an espresso, I still thought I'd make putting some words together a priority...

I won't even try to describe any of the delights of Rome (I'll leave that to proper travel writers), but in all it was a great experience and a very well organised event: I suppose that if I was being really picky, I could find faults (e.g. the lack of any directions or signage from the Metro station to the Expo building - at least on the first day), but in all I have to congratulate the organisers and everyone involved on a job very well done, especially considering everything else that they had to contend with, both planned and not (e.g. the whole Papal conclave, enthronement and general hoo-ha, the Italy v Ireland rugby game, Roma's home game etc).

We made it to the Expo (mainly by spotting people with green rucksacks and heading where they were coming from) and we found it good if a bit small (many of the pre-announced companies and delegations from other marathons were absent); at least all the 'important' stuff (registration, race pack handouts etc) worked like clock-work and really got us in the mood for race day! Dimitra, Alexia and Niko registered for the 5k fun-run (which ended up being a 3.6k more-fun-and-less-run and nothing like the Athens 5k and 10k equivalent which are treated like proper races in themselves, with chip times and strong performances by most participants). We also met the representative of Saucony for the region of Lazio, had a nice chat with him while my sister was queuing for some body fat analysis or another and left with a bagful of goodies and a recommendation for a Sicilian eatery very close to our hotel.

We then spent the next couple of days walking the length and breadth of central Rome (perhaps not the best pre-marathon strategy, but when in a town like Rome, anything else would have been a waste!) and constantly checking for any update on the race situation: As I had mentioned in my previous post, the election of the new Pope brought about quite a bit of uncertainty as to what time the race would be or even if it would follow the planned route or not... In the end a 9:30 start time and the original route (less St Peter's square) was confirmed.

And so to the race! As you know, I had publicly set myself a target of finishing in 3h 30': As it happened, I failed most emphatically! But I did at least make it to the end, improving on my personal best in the process. So, what went wrong? Not sure yet, but there were a number of factors:

As my previous post shows, before the race I was concerned with energy intake (the gels I had relied on started disagreeing with me on my last training runs). I sorted that problem out for the race (thank you Gu!),  but in the process neglected to plan my hydration properly and relied on whatever the organisers gave out. A 500ml hydration belt was almost an afterthought. 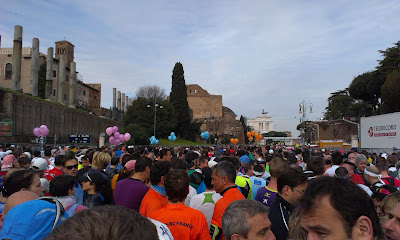 I was struggling with a cold on the day as well, which, amongst other things, confused my sense of taste: this meant that as I was coming up to the hydration points, all felt like was water. To be fair, I should have realised that not taking any isotonic drinks in would get me in trouble, but I didn't have the clearest of heads at the time (which leads us back to the need for prior planning and point 1!).

Despite all that, for much of the race I still felt I was running strongly: I set a comfortable PB for the half marathon distance, was running faster than expected till about the 26th km and was on pace for a 3:30 finish all the way to the 30th. But by then my legs had started to seize up and when the 3:30 pacers overtook me (their sky blue balloons tapping me mockingly on the head as they ran past), I knew I was in trouble.

This and the growing stiffness in my legs didn't improve my morale either and I felt I lost connection with the spectators and other runners, I was in a little world of misery all of my own: No more clapping for the bands, the shouts of 'bravi' and 'siete tutti fortissimi' didn't sound as if they were meant for me and when a runner slowed to a walk just ahead of me, my hand went to his shoulder as much as to avoid running into him as for support. The only exception was a young girl in Piazza del Popolo (39th km), who, in words I understood then but have since forgotten, cheered me on, entreated me to not give up and assured me that it wasn't long to go now... I had slowed to a short walk at the time, but I couldn't help but pick up speed again, do my best to continue running on those horrible cobbles (Piazza del Popolo had some of the worst) and at least carry on for a bit more before slowing down again...


In fact, I was so stiff in the last 10k that I had to take short walking breaks a number of times and even stop and stretch once (apart from my legs, my back and abs were also starting to seize up): My average pace for the last 6k was 6:18 min/km (10:05 min/mile), against an target of 4:57 min/km on average! At the last four km or so the 3:45 pacers caught up with me, but fortunately instead of taking the remaining wind out of my sails they proved a great help, personally urging on everyone they came across: they were the penultimate shot of focus and willpower I needed to become something resembling a runner again! I wanted to list all their names here, but unfortunately I couldn't find them anywhere on the internet; you know who you are, and you'll probably never read this anyway: but thank you one and all!

I said 'penultimate' shot, because there was of course the sight of Colosseum with about a kilometer to go, the last lap round it, the guy who unfurled a huge Texas flag in front of me (which of course meant that I just had to overtake him, regardless of how I felt!) but above all the thought that at any moment I would be coming up to where my family and girlfriend were watching from: I couldn't give up now! And I'm glad I didn't: there is even a deceptive video clip my sister shot of me overtaking people on the finish line! 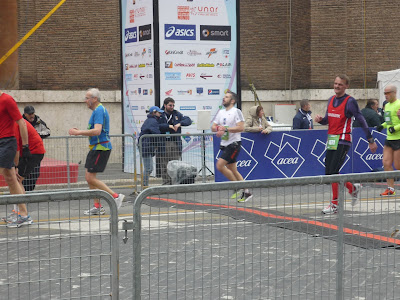 In the end I finished just behind the 3:45 pacers, with a clock time of 3:45:22 and a real time of 3:44:29. My previous PB was 3:51:18. A few yards after the finish line my legs finally gave up, I couldn't even walk other than to drag my carcass to the closest first aid station, trying to think for the Italian word for 'cramp' (I didn’t have to: they spoke fluent English).


After a short treatment, I eventually regained control of my legs, dug out an apple from the post-race goody bag and limped to the medal engraving tent and hence through the ruins of ancient Rome and to my hotel bed... 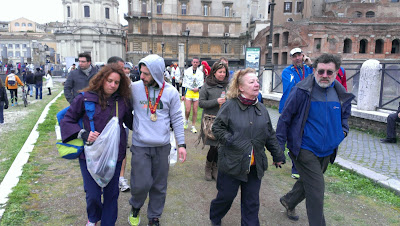 So you see the event left me with a bit of a bittersweet taste: Objectively it was a lovely race, I had trained for it as well as I've ever had, but lack of planning (or perhaps too strong a start?) meant that I missed a goal that I had felt was within my grasp...

But with the benefit of a few days to reflect, I can honestly say I am happy with the whole experience: There were so many beautiful moments (the band at the 8.5 k point playing 'A Banda', one of my all time favourite songs, running through narrow cobbled alleys and suddenly 'chancing' upon the Fontana di Trevi, the final kilometer, climbing the incline around the Colosseum and down towards the finish line...)

I was fortunate to exceed my expectations in my first marathon (Athens), so the pain of Rome's latter stages was a useful reminder that marathons are not supposed to be easy... Rome taught me a valuable lesson in planning (and humility) but still let me walk away with my head held high and a host of lovely memories. There will be more marathons to follow (God willing and knees holding) and I'll be better prepared to face them thanks to this.

And then there is the trip... If it wasn't for the marathon we wouldn't have made the journey. 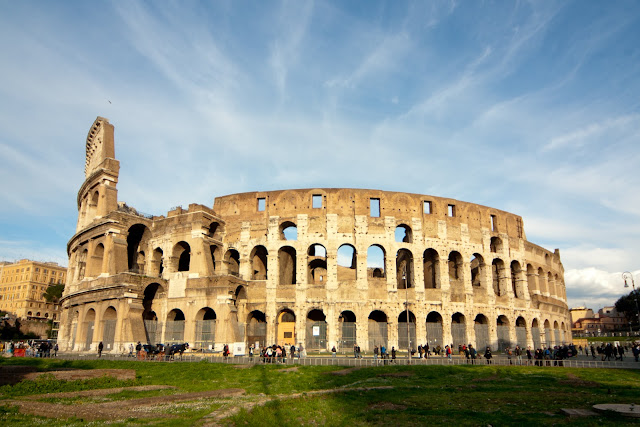 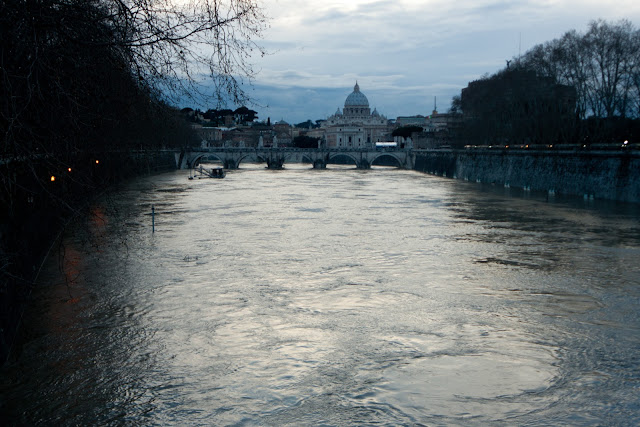